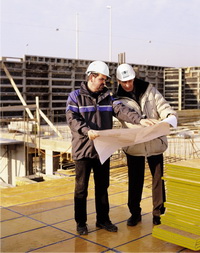 Founded in 1992, GSV Güteschutzverband Betonschalungen Europa e. V. has set itself the goal of promoting a spirit of partnership between formwork users and suppliers to further develop formwork technology and to ensure its quality. Members of the association are well-known manufacturers of formwork systems and components as well as European formwork shuttering users. Since its inception, the association has developed into a respected body throughout the whole building industry: The GSV mark granted by the association is recognised both nationally and internationally as a quality seal.

In addition, the GSV publishes its points of view of current events, issues and the needs of the market, and is involved in interesting projects in research and development. Informational booklets and guidelines published by the GSV have become standard works on the market. With the instructional booklet “Rental formwork” and the guideline “Quality criteria for rental formwork”, GSV has laid the foundations for a fair procedure in a market segment that is of utmost importance both for users and for the formwork supplier.

To remain true to its principles and the aims of the association, GSV Güteschutzverband Betonschalungen e. V. will continue to be active throughout Europe in the future, promoting quality assurance, research and development as well as working on formwork standards.

Chairman of the Board